Outbreaks of malaria are often linked to climate variations and land use changes that affect the life cycles of the mosquito vector and the Plasmodium parasite. Early warning of the timing and locations of these epidemics can facilitate more effective targeting of resources for disease prevention, control, and treatment. Our research integrates epidemiological data from malaria surveillance systems with climate and land cover data from satellite Earth observations to determine the environmental triggers of malaria outbreaks. We have applied the results to create the Epidemic Prognosis Incorporating Disease and Environmental Monitoring for Integrated Assessment (EPIDEMIA) system, which supports malaria forecasting in epidemic-prone regions of the Ethiopian highlands. EPIDEMIA provides an open-source software toolbox for data harmonization, predictive modeling, and report generation implemented in the R language and software environment. Access to Earth observation data is through a Google Earth Engine application that supports cloud-based data processing and produces downloadable summaries for use with EPIDEMIA. The entire system can be run on a laptop or desktop computer to be usable with existing public health surveillance systems and databases and to be implementable in regional public health offices. 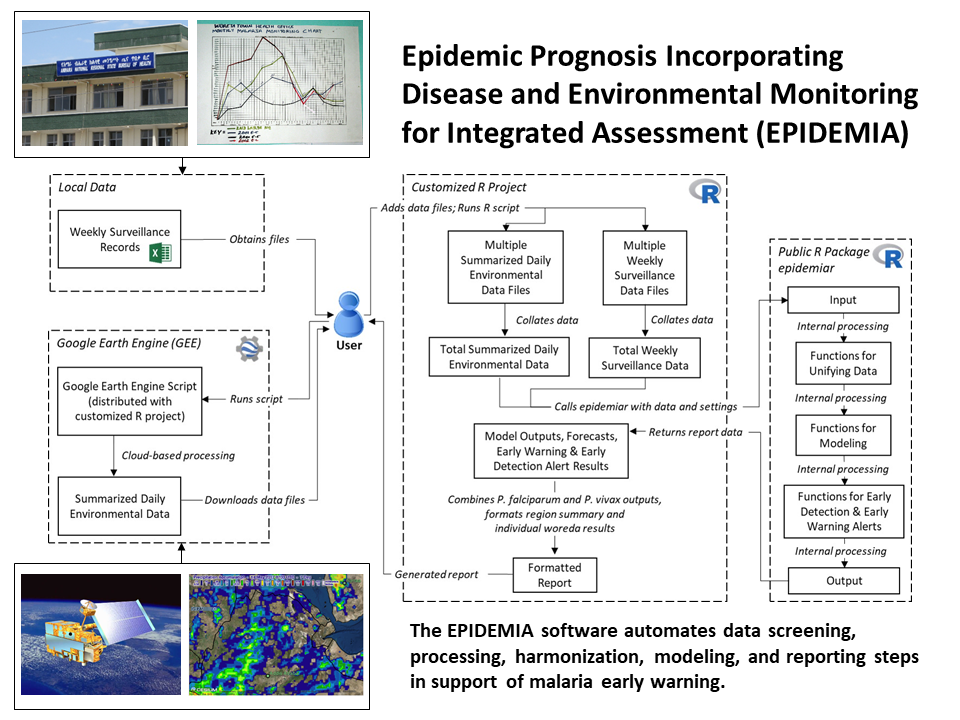 Conceptual diagram of information flow through the EPIDEMIA system.

EPIDEMIA is being developed and implemented by an interdisciplinary team that includes scientists from the University of Oklahoma along with partners from public health agencies, non-governmental organizations, and universities in Ethiopia. In the first stage of the project, the U.S. research team was responsible for developing software and producing forecasts and the Ethiopian partners were responsible for providing epidemiological data and evaluating the forecasting results. In the second stage of the project, a technical support team was formed in to implement EPIDEMIA in the Amhara region of Ethiopia. This team includes representatives from the Health Development and Malaria Association (an Ethiopian NGO), the Amhara Regional Health Bureau, and Bahir Dar University. Training and technology transfer were provided through workshops in the U.S. and Ethiopia, and this team is currently using the system to produce weekly malaria forecasts for the Amhara region. Our research group continues to work on extending and improving EPIDEMIA. Current efforts include enhancements to the software, testing and improvement of the forecasting models, exploration of new environmental data sources, and design of new data visualization tools. 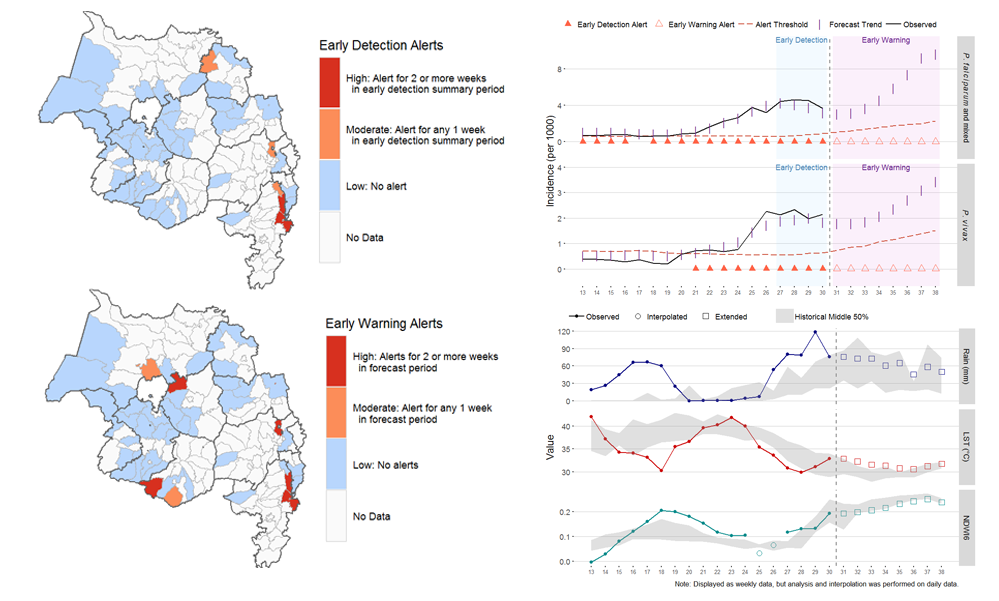 Examples ouputs generated by EPIDEMIA, including a risk map for P. falciparum malaria outbreaks in the Amhara region and control charts for Shewa Robit district from week 30 of 2016.

This research is funded by a grant from the National Institutes of Health, National Institute of Allergy and Infectious Diseases (R01AI079411). Development of software for acquisition and processing of earth observation data has also been supported by NASA (NNX11AF67G).

Software and Other Resources