The increasing prevalence of obesity in the United States has been influenced by environmental factors that discourage physical activity and limit the availability of healthy foods. Most research on these phenomena has taken place in metropolitan areas, focusing on the effects of suburban sprawl on physical activity and the lack of supermarket access in impoverished urban areas. However, the high prevalence of obesity in rural areas indicates a need for additional research outside of major metropolitan regions. Whereas cities and suburbs are dominated by the built environment, the character of rural landscapes is molded by the natural environment, which influences the social and economic characteristics of rural communities and ultimately the health of rural populations. The overarching goal of this research was to test multiple working hypotheses about the environmental drivers of obesity, with an emphasis on contrasts between metropolitan and non-metropolitan areas within the conterminous United States.

Map of obesity prevance in the United States based on 2000-2006 BRFSS data smoothed with the weighted headbanging technique (Michimi and Wimberly 2010a).

We used spatial statistics to analyze county-level data from the Behavioral Risk Factor Surveillance System (BRFSS) and identify clusters of high and low obesity, fruit and vegetable consumption, and physical activity in the conterminous United States (Michimi and Wimberly 2015a). In major metropolitan areas, counties with high densities of supermarkets and full-service restaurants had lower obesity prevalence than counties dominated by convenience stores and fast-food restaurants (Michimi and Wimberly 2015). We found that increased distance from supermarkets was associated with high obesity prevalence in metropolitan counties, but not in more rural, non-metropolitan areas (Michimi and Wimberly 2015b). In these non-metropolitan counties, the abundances of natural amenities and recreational opportunities were associated with low obesity prevalence and high rates of physical activity (Michimi and Wimberly 2012). Overall, these results highlighted strong geographic variation in obesity and associated risk factors within the United States, but also showed that the environmental determinants of these patterns are different in urban versus rural contexts. To be effective, public health interventions focused on reducing obesity, improving diet, and encouraging physical activity should be tailored to the unique social, cultural, and physical geographies of different locations. 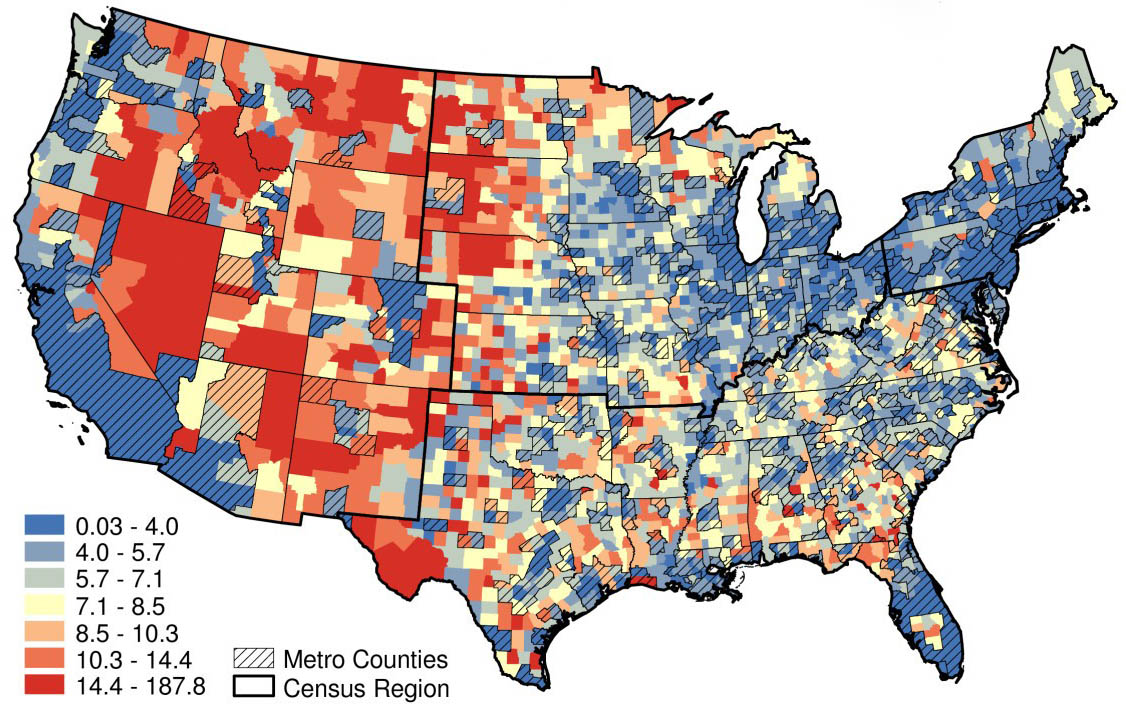 Map of population-weighted distance to mean distance to the nearest small, medium, or large supermarket summarized at the county level (Michimi and Wimberly 2010b).